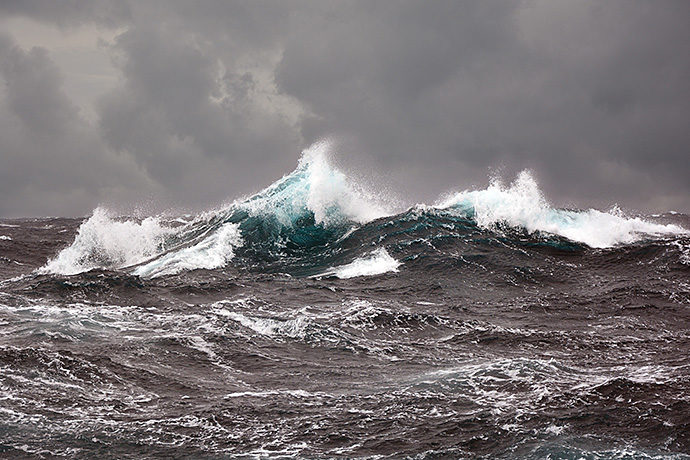 Waves interact with conditions in the atmosphere and the ocean. (andrej67/iStock/Getty Images)

Why is ocean wave forecasting important?

Shipping, fisheries, offshore operations, coastal protection and marine recreation are all strongly dependent on weather and sea conditions and require marine weather forecasts extending to the limit of the medium-range forecasting period (up to ten days ahead). Such forecasts can help to save lives and limit the damage caused by severe storms. The ocean waves that affect sea conditions are primarily generated by surface winds. The waves can travel thousands of kilometres from where they originated. The ocean waves in turn influence the atmosphere above and the ocean below, so it is important to include their effects in weather forecasts. In ECMWF’s Integrated Forecasting System (IFS), the wave model is coupled to an atmospheric model and an ocean model so that all relevant interactions can be taken into account and all predictions are consistent with each other.

How are ocean waves forecast at ECMWF?

The ocean surface wave field consists of a highly complex combination of waves with different heights, wavelengths and directions. This is too complex to model explicitly, so the ECMWF ocean wave model (ECWAM) is based on a statistical description of surface waves. It covers both the open ocean and coastal waters. The surface wave field is simplified and represented by a spectrum of waves according to frequency (or wavelength) and direction of propagation. Waves are also divided into those generated by local wind (wind sea waves) and waves which have travelled away from where they were generated (swell). The wave model then simulates how the wave spectrum evolves in space and time by representing how the wind generates waves, how different waves interact with each other, and how wave energy gradually dissipates.

What ocean wave observations are used?

Satellite-based instruments, such as altimeters, provide data on significant wave height, a widely used sea-state parameter which is roughly the average height of the highest one third of waves. These data are combined with the previous wave forecast, in a process called data assimilation, to provide the initial conditions for the next forecast. Wave data from ocean buoys and other sources are used to independently check the quality of modelled wave parameters. Accurate forecasts of wind speed are important for accurate forecasts of ocean waves.

Variables predicted by the IFS include the full two-dimensional wave spectra, significant wave height, mean wave period and mean wave direction. They are provided for wind waves, swell and a combination of the two. Information is also provided about the likelihood of extreme (or freak) waves. Ocean wave forecasts are available as high-resolution deterministic forecasts (14 km grid spacing) and as lower-resolution ensemble forecasts (28 km grid spacing). Ensemble forecasts provide information on the range of possible scenarios and the likelihood of their occurrence. They can be used, for example, to predict the probability that significant waves will be higher or lower than a particular threshold. The spread in predicted values provides an indication of the uncertainty associated with a forecast.

How are ocean wave forecasts developing?

Ongoing research is focused on enhancing the coupling between the different components of the ECMWF Earth system model, both in terms of physical parametrization involving ocean waves physics and in terms of numerical code design to meet the scalability challenges of future computer architecture. Waves are known to be a controlling factor in the momentum exchange between the atmosphere and the oceans. An IFS upgrade in 2020 revised how this process is controlled for intense tropical cyclones winds. However, we are currently working on a revision that is based on a better representation of part of the wave spectrum. Moreover, when waves break, they influence heat, moisture and gas exchanges. Revised parametrizations of those exchanges that include direct wave components are being tested.