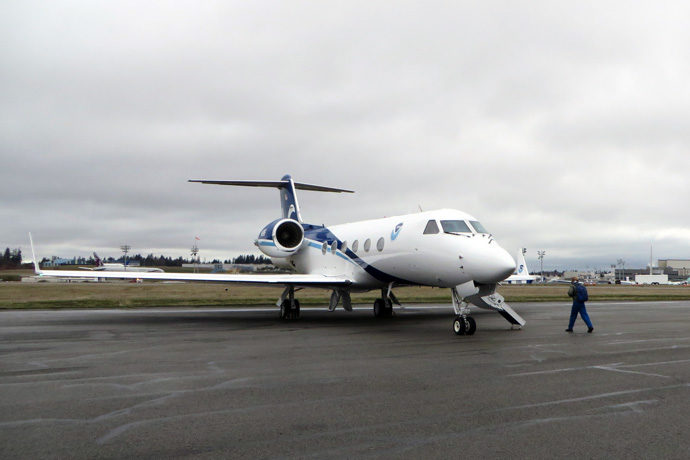 A NOAA Gulfstream IV (G-4) aircraft, which is being used during the campaign to collect vital information on storm characteristics. (Photo: Jack Parrish/NOAA/AOC)

In winter the passage of North Atlantic and North Pacific low-pressure systems can result in extreme rainfall and flooding. Within these storms, it is generally the atmospheric river (AR), or a narrow band of intense water vapour flux, that is responsible for the extreme rainfall. A recent example in Europe was storm Desmond in December 2015. These storms are also crucial for water supply in these regions.

A field campaign over the eastern Pacific called ‘Atmospheric River Reconnaissance’ (AR recon) has just begun and will run until late February 2018. The campaign is led by Scripps Institution of Oceanography’s Center for Western Weather and Water Extremes (CW3E) and includes the National Weather Service and Naval Research Laboratory as project partners. The aim of AR recon, said CW3E Director F. Martin Ralph and project lead, is to provide “research and information to the United States National Weather Service to help better inform Western decision-makers regarding storm impacts, water management, and flood mitigation”.

The data collected in AR recon are of relevance to ECMWF as they allow diagnostics of ARs to be undertaken. In particular, how well are the observed water vapour fluxes, a key signature of ARs, captured by ECMWF’s Integrated Forecasting System (IFS)? This research has important implications for our understanding of latent heat fluxes and atmospheric predictability. ECMWF is providing forecast data to aid AR forecasting and flight planning, and ECMWF scientists are also contributing to forecasting duties.

AR recon has three aircraft available for probing ARs, two U.S. Air Force Reserve WC-130J Super Hercules aircraft and a NOAA Gulfstream IV (G-4) aircraft. From these aircraft, dropsondes (instruments that measure the winds, water vapour content and temperature) will be dropped across the storms to collect vital information on the storm characteristics.

The first AR recon flights were over the last weekend in January, with missions centred on 00 UTC Saturday, 27 January 2018 and on 00 UTC Monday, 29 January 2018. Further flights centred on 00 UTC on 1 and 3 February 2018 have also taken place. In the map below, the red points show the location of the dropsondes during the flight mission of 3 February. The data they provided were ingested into ECMWF’s IFS.

Map showing locations of radiosonde observations centred on 3 February 2018 00 UTC that were ingested into ECMWF’s Integrated Forecasting System (IFS). Temperature observations are provided in BUFR or TAC data format from ship records and land stations. Of the 871 observations ingested, 78 came from dropsondes as part of the AR recon campaign.