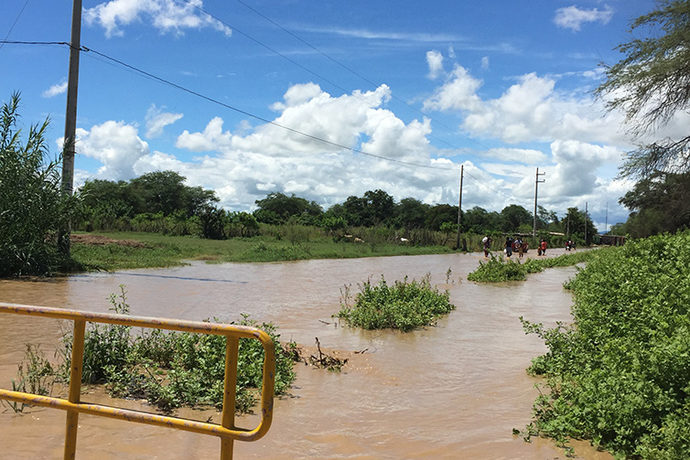 Heavy rainfall can lead to devastating floods, as here in Peru in early 2017. (Photo: Maria-Helena Ramos)

The UN-sponsored International Day for Disaster Reduction, held every 13 October, celebrates how people and communities around the world are reducing their exposure to disasters. As a global numerical weather prediction centre, ECMWF has a role to play in supporting the response to weather-related disasters. It does so in many ways, in close collaboration with the WMO.

One of these is a new initiative with the WMO which will give the United Nations system and other international organisations access to ECMWF forecast products that provide early indications of severe weather events.

Agencies and organisations in the UN system, such as the World Health Organization (WHO) and the United Nations Office for Disaster Risk Reduction (UNISDR), will be able to use graphical products from ECMWF's Extreme Forecast Index (EFI) to aid decision-making and planning during emergencies. Charts will be available through a common WMO technical platform, and ECMWF will provide expert training on how to interpret the information.

In proposing this initiative, WMO Secretary-General Petteri Taalas said it was “an effective approach to assuring specialised meteorological support and assistance to decision-makers” ahead of and during emergencies.

The need for timely meteorological information in emergency situations is certainly great: the Internal Displacement Monitoring Centre (IDMC) reported 24.2 million new displacements by disasters in 2016, the majority brought on by weather-related hazards, in particular storms.

The EFI was developed at ECMWF to provide forecasters with general guidance on potential extreme events. It summarises information from the ensemble forecast in a simple map that forecasters can use as an ‘alarm bell’. The map highlights places where the current forecast is indicating a significantly increased risk of an unusually severe weather event.

The charts show the Extreme Forecast Index (EFI) for 10-metre wind gusts on 5 October 2017 one day (top) and five days (bottom) ahead. Storm Xavier brought strong wind gusts over parts of the Netherlands, Germany and Poland that day, causing fatalities and disrupting transport.

Other forecasts in real time

ECMWF also provides a range of products freely available to the public without restriction on use, called ‘WMO Essential’ products, which includes tropical cyclone tracks. A set of ‘WMO Additional’ products is freely available to WMO Members and is currently being expanded following ECMWF’s recent designation as a World Meteorological Centre. Reduced-fee licences, some sponsored by donors via the WMO, are available for national meteorological and hydrological services, giving access either to the Web charts or to the whole range of real-time products.

The value of meteorological data and information during weather-related disasters was shown in March this year, when ECMWF provided additional data and expertise to support the response to devastating flooding in Peru caused by exceptional rainfall.

Flooding following heavy rainfall in parts of Peru in the first few months of 2017 caused damage to housing and infrastructure. (Photos: Maria-Helena Ramos)

ECMWF products, authorised by the ECMWF Director-General in view of the exceptional circumstances, helped forecasters at the Peruvian Meteorological and Hydrological Service (SENAMHI) to issue warnings of heavy rainfall that was likely to cause new flooding or to exacerbate existing flooding.

Special attention was also paid to events that could hinder rescue operations or endanger rescuers’ lives.

Anomalously high precipitation (green shading) in the region of Peru in the period February–April 2017 could be seen in the ECMWF seasonal forecast from 1 November 2016.

Separately, ECMWF is working with the Red Cross Red Crescent Climate Centre and the University of Reading to develop forecast products to help communities take action before and after major flash floods.

The death toll from such events can be high, especially in less developed countries which may lack effective local warning systems and have limited capacity to respond to an impending disaster.

Ultimately the aim of the collaboration is to develop a forecast-based financing system for flash floods.

ECMWF forecasts of river flooding are already contributing to a pilot forecast-based financing system through the Global Flood Awareness System (GloFAS) in collaboration with the Joint Research Centre of the European Commission supported by the Copernicus Emergency Management Service (Early Warning Systems).

A forecast-based financing system releases funds for preparedness actions when forecasts predict that flooding is likely.

The WMO's Severe Weather Forecasting Demonstration Project (SWFDP) is successfully strengthening the capacity of national meteorological and hydrological services (NMHSs) in developing and least developed countries to deliver improved forecasts and warnings of severe weather to save lives, livelihoods and property.

ECMWF provides graphical products derived from ensemble and high-resolution forecasts for the domains of all six regional projects. Participants in these projects can access the forecast charts available via ECMWF’s website.

Extending the skilful range of severe weather prediction is one of ECMWF’s strategic goals as set out in the Strategy to 2025.

One target is to provide economically and societally valuable forecasts of extreme wind speed and precipitation well into the second week of the forecast, up from the current range of just about one week.

Another is to extend the range of skilful predictions of extreme temperatures in heat waves and cold spells to three weeks ahead on average, compared to about two weeks currently.