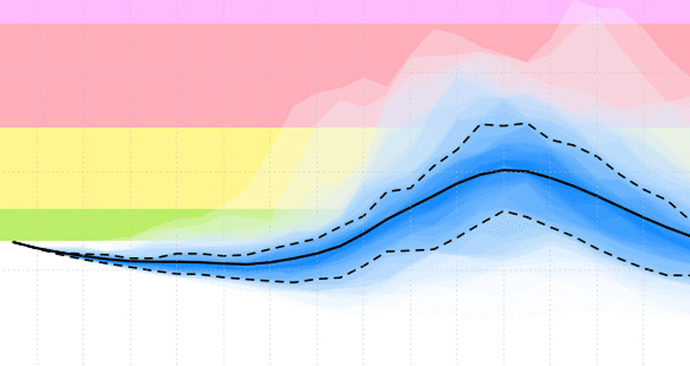 Severe flooding along the cross-border Asian rivers of the Ganges and Brahmaputra in July and August this year coincided with tests of new extended-range river discharge forecasts at ECMWF.

First assessments of the new forecasts are encouraging but more work is needed before they can be made operational as part of the Global Flood Awareness System (GloFAS).

ECMWF is actively involved in developing GloFAS in close co-operation with the European Commission’s Joint Research Centre with the support of national authorities and research institutions such as the University of Reading.

GloFAS couples state-of-the art weather forecasts with a hydrological model to produce daily ensemble forecasts of river discharge with a forecast horizon of 30 days across a global river network.

The primary purpose of GloFAS is to provide a cross-border system with early flood guidance information helping humanitarian agencies, national hydro-meteorological services and commercial companies to strengthen and improve forecasting capacities, preparedness, and the response to and mitigation of natural hazards.

GloFAS has been running daily in pre-operational mode since 2011 with forecasts available on the web interface (http://www.globalfloods.eu/).

It is expected to become operational as part of the Copernicus Emergency Management Service at the end of 2017.

The system has been undergoing rapid development since its launch. New versions of GloFAS are released regularly to incorporate hydrological model updates, new products and user interface improvements.

One important aspect of GloFAS is the provision of warnings of flood events that occur across country borders along very large rivers. Such floods can move down rivers for over a week, making forecasts several weeks ahead particularly useful.

Recent examples are the extreme monsoon-related flood waves that moved down the cross-border Asian rivers of the Ganges and Brahmaputra in July and August 2017.

The floods have affected millions of people across the region and have killed hundreds.

Daily event map produced by the Emergency Response Coordination Centre (ERCC) for 18 August 2017. The ERCC, operating within the European Commission's Humanitarian Aid and Civil Protection department (ECHO), was set up to support a coordinated and quicker response to disasters both inside and outside Europe. For the most important events, it publishes in near real-time summary factsheets, which are archived and available to the public at http://erccportal.jrc.ec.europa.eu/Maps/Daily-maps.

Recent work on GloFAS has aimed to improve the hydrological forecasts beyond 15 days, as flood waves were generally underestimated at longer lead times.

The new system extends the hydrological forcings, previously only based on the medium range forecast up to 15 days, with information available from ECMWF’s monthly forecasts.

In August 2017, the new system was already running on a test platform. The flood waves of August 2017 have provided an opportunity to evaluate in near real-time the improvements brought by the new system.

ECMWF’s analysis for the week of 7 to 13 August 2017 for the Middle East and India region (left) shows a very high precipitation anomaly in the area of Nepal, Bangladesh and northeast India. ECMWF’s extended-range forecast for the same period starting on 27 July (right) shows a signal for higher than normal precipitation, which became more pronounced in subsequent forecasts.

For the August 2017 monsoon flood in Nepal, India and Bangladesh, the monthly ECMWF precipitation forecasts suggested wetter than normal conditions for the peak precipitation period 12 to 18 days ahead of the event.

River discharge forecasts initialised on 28 July 2017 produced by the new (left) and old (right) GloFAS systems for the Brahmaputra river in northern Bangladesh at the station of Bahadurabad. The flood peaked on 16 August 2017.

First tests showed that by 28 July the new system was able to forecast a relatively large flood peak to occur between 13 and 22 August.

Whilst the actual flood peaked around 16 August according to the Bangladeshi Flood Forecasting Centre, the extended-range system showed a marked improvement from the previous version, which forecast a much smaller flood which peaked too early.

Further tests are needed before the new version is operationally implemented in GloFAS, including the creation of a set of re-forecasts that help end users to quantify the value of the flood forecasts before using them operationally.

Whilst this example showed great potential for GloFAS forecasts at the sub-monthly range, the flood forecast skill at such long lead time remains challenging, with some areas showing lower predictability than others.

However, the GloFAS team will continue to investigate how best to improve the forecasts so that GloFAS can remain a trusted source of global flood predictions at the sub-monthly and the extended range.