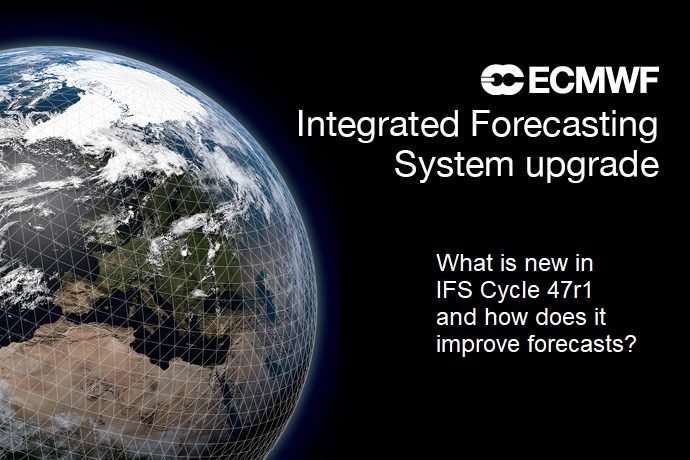 The upgrade to IFS Cycle 47r1 brings many changes in data assimilation and Earth system modelling. It also introduces a new tropical cyclone wind radii product, which will facilitate the identification of wind-related hazards.

IFS Cycle 47r1 improves both ECMWF’s high-resolution forecast (HRES) and the ensemble forecast (ENS). The horizontal grid spacing in HRES is about 9 km and in ENS about 18 km.

Forecasts of several near-surface parameters, most notably 2-metre temperature and humidity, are better by about 0.5–1%. This is true both in the extratropics and, when verified against observations, in the tropics.

Extratropical 10-metre wind in HRES is slightly improved, as is total cloud cover in ENS and HRES.

The prediction of winds in deep tropical cyclones has been improved. (Image: Thinkstock/Stocktreck Images)

The upgrade alleviates the problem by changing the model specification for momentum exchange at the sea surface.

Improvements in the stratosphere

The upgrade greatly improves analyses and forecasts in the stratosphere, mainly by reducing large-scale biases.

The analysis (our best estimate of the current state of the atmosphere) benefits from a new version of weak-constraint 4D-Var data assimilation. The change means that temperature biases above 100 hPa are reduced by up to 50%.

In weak-constraint 4D-Var, for a parameter x such as temperature, a forcing term η cools the trajectory at every time step to correct for the temperature warm bias in the model. In this formulation of 4D-Var, the error statistics of the model bias need to be calculated offline. They then enter into the calculations through which the data assimilation system determines the optimal combination of initial state and forcing term adjustments.

A change in the model has reduced numerical errors accumulating at high horizontal resolution due to insufficient vertical resolution in the stratosphere. This was achieved by moving from third-order (cubic) to fifth-order (quintic) vertical interpolation.

These plots show differences in zonally (latitudinally) averaged temperature between quintic and cubic vertical interpolation forecasts at a grid spacing of about 79 km (left) and about 9 km (right). The plots show that quintic vertical interpolation warms the stratosphere more at high horizontal resolution, thus reducing the cold bias at that resolution. Mean values over 31 forecasts starting in July 2017 and valid at day 10 are shown.

Among other changes to forecast outputs, new parameters specify the maximum distance from the centre of a tropical cyclone (TC) to locations where the surface wind speed reaches 34, 50 and 64 knots (wind radii). This information will help users to assess the risk of wind-related hazards.

The chart shows an HRES wind radii forecast (IFS Cycle 47r1) for the 34-knot wind threshold up to 240 hours ahead, initialised at 12 UTC on 30 August 2019. The red dots indicate the predicted centre of Hurricane Dorian at 12-hour intervals.

The wind radii are computed for each of four quadrants (NE, SE, SW and NW), delivering a total of 12 size metrics for each TC at each time step.

Webinar on how forecasts are improved in IFS Cycle 47r1

Further information on all aspects of the upgrade is available on the IFS Cycle 47r1 implementation web page.

A detailed presentation of the upgrade, including scorecards, will also be included in the summer issue of the ECMWF Newsletter, due to be published later this month.