Presenting Destination Earth: a digital replica of our planet 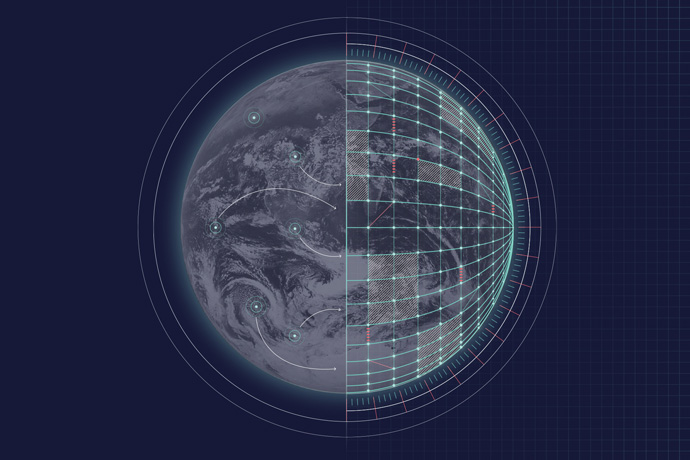 ECMWF will present EU plans on 5 March to develop a high-precision digital model of our planet. The initiative is called Destination Earth (DestinE). Its purpose is to create a digital twin of the Earth that will make it possible to interactively explore various natural processes and human activities.

The aim is to support the EU’s green transition by providing a new Earth system simulation and observation capability. DestinE will use artificial intelligence and draw on advances made in numerical weather prediction.

ECMWF is set to be a key part of this exciting and ambitious project, alongside institutions such as the European Space Agency (ESA) and the European Organisation for the Exploitation of Meteorological Satellites (EUMETSAT).

Thomas Skordas, the European Commission’s Director for Digital Excellence & Science Infrastructure, said: “Efforts to understand how our climate will evolve over the coming decades and how to best prevent or tackle these changes are vital both for mitigation policies and for building climate resilience.

“Destination Earth is a key initiative for Europe’s twin digital and green transitions. It will greatly enhance our ability to produce climate models with unprecedented detail and reliability, allowing policy-makers to anticipate and mitigate the effects of climate change, saving lives and alleviating economic consequences in cases of natural disasters.”

DestinE will allow users to explore the consequences of different strategies to tackle climate change by testing a range of scenarios and mitigation strategies.

It could for example be used to assess the likelihood of extreme droughts in different places, and how that risk might be mitigated.

New approaches from machine learning and artificial intelligence will be used to improve the realism and efficiency of the digital representations of our world.

Ultimately, DestinE will revolutionise the European capability to monitor and predict our changing planet, based on the integration of extreme-scale computing and the real-time exploitation of all available environmental data.

At the heart of DestinE will be digital models of the Earth. These will mimic our world in an interactive way. Users will be able to change just a single aspect and explore the results.

A technique from weather prediction that will be useful is that of data assimilation: the combination of information from observations and computer models to distil the most likely current state of the Earth system.

The DestinE digital twins will push this approach further than ever. It will produce near real-time, highly detailed and constantly evolving models of the Earth, including impacts from human activities.

Observations will come from a multitude of sources, both traditional and novel. Individual digital twins will be combined to build a single highly complex model of the Earth system which will be more detailed than anything seen before.

This will provide precise insight into the past as well as into possible futures.

The programme will launch in 2021 and will be implemented over the following seven to ten years. It is anticipated that ECMWF will be a major partner in the overall EU initiative alongside ESA and EUMETSAT. Contributions will also be provided by a broad range of actors in Europe.

A key milestone is the launch of the first two digital twins by December 2023. One of these will be the Digital Twin on Weather-Induced and Geophysical Extremes. Managed by ECMWF, this digital twin will provide capabilities and services for the assessment and prediction of environmental extremes.

There will also be a Digital Twin on Climate Change Adaptation. This will support the generation of analytical insights and testing of predictive scenarios in support of climate adaptation and mitigation policies at decadal timescales, at regional and national levels.

ECMWF Director-General Florence Rabier said: “In the last few years, ECMWF has been building community efforts to combine computational science and Earth system modelling. One of the major contributions of Destination Earth will be to bring another dimension to these efforts by providing a breakthrough in capabilities and interactivity.”

In the 5 March seminar, Deputy Director of Research Peter Bauer will present an overview of the initiative, and Head of Earth System Modelling Nils Wedi will provide information on high-resolution simulations.

The seminar is entitled ‘How the EC's DestinE programme transforms environmental policy making – Digital twins as a step-change for Earth-system modelling and data assimilation’.

It is the first of a series which will see experts from ESA, EUMETSAT, the European Commission and the wider scientific community contribute their views and plans for the implementation of this ground-breaking EU initiative.

Pre-registration is not required, and the joining details are available on the event page of the seminar.

For more information on Destination Earth, see the European Commission page on the initiative.