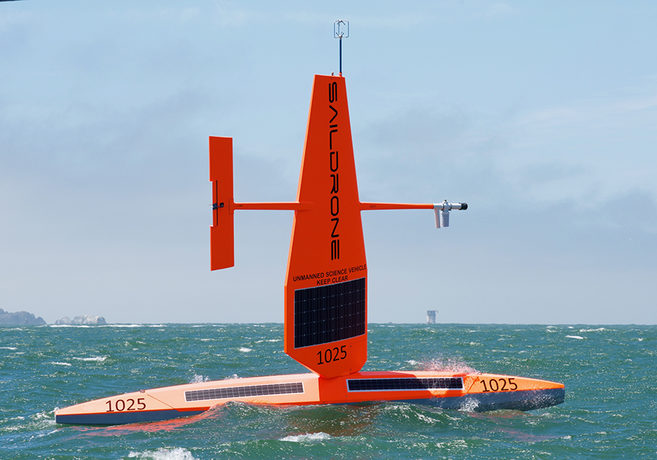 ECMWF is to ingest data from Saildrone uncrewed surface vehicles (USVs) later this year to improve our understanding of the behaviour of the Gulf Stream and its influence on weather.

An agreement with Google and Saildrone Inc. foresees that up to six solar-powered USVs will cover a part of the Gulf Stream that is crucial for forecasts.

Real-time measurements of the atmosphere and ocean conditions to a depth of 100 metres will provide detailed data to support the modelling of this powerful ocean current.

The goal is to improve weather forecasts at all timescales, from medium-range to extended-range forecasts. ECMWF started to use data from Saildrone devices in 2019.

The Gulf Stream in the northwest Atlantic Ocean is of particular importance to ECMWF because of the magnitude of ocean temperature errors caused by mispositioning it.

The map shows errors in the Gulf Stream position in the ECMWF analysis at 12 UTC on 2 December 2019. The contours of sea-surface temperature from an observation-based satellite product are shown in blue. The green arrows show the ECMWF analysis of ocean currents. Off the coast of North Carolina, one can see a large meander in the analysis of ocean currents, which is not visible in the observed sea-surface temperature contours.

This area is upstream from Europe and therefore plays a key role in medium-range predictability over that part of the world.

Gulf Stream sea-surface temperatures are also an important factor globally in forecasts beyond the medium range.

If the position of the Gulf Stream in ECMWF analyses were to be improved, stronger ocean–atmosphere coupling could be implemented in both the analyses and forecasts.

Saildrone USVs carry acoustic Doppler current profiler (ADCP) instruments, which provide ocean current data to a depth of around 100 m. Having this data together with near-surface and air­–sea measurements in the region of the Gulf Stream would be valuable for model calibration and the verification of new developments which seek to improve the position of the Gulf Stream.

Ultimately this will lead to a better understanding of the structural uncertainties in the Gulf Stream flow.

The red stripes show approximate proposed transects of the Gulf Stream where ECMWF would benefit from Saildrone observations. By crossing the Gulf Stream, the Saildrone USVs can locate it very accurately.

Temperature effects at the air–sea interface

One of the capabilities of the Saildrone USVs is to measure the difference between the ‘skin temperature’ at the very surface of the sea and the ‘sea-surface temperature’ at a depth of about half a metre.

According to previous Saildrone measurements off the coast of Africa and in the Mediterranean, temperature differences show different behaviour between warm and dry conditions on the one hand and cool and humid conditions on the other.

The measurements to be taken by the Saildrone USVs in the Gulf Stream region will provide additional data to calibrate the skin temperature parametrizations within ECMWF’s Integrated Forecasting System (IFS). They will sample more locations and different conditions, thus further improving the coupled Earth system forecasting and assimilation systems.

He points out that the Gulf Stream strongly influences where weather systems that cross the Atlantic end up, and he talks about the wider significance of such forecasts (19:12 to 22:10 minutes).

The Saildrone study of the Gulf Stream to be undertaken by ECMWF comes at the beginning of the United Nations Decade of Ocean Science for Sustainable Development, to which integrated Earth system approaches such as developed at ECMWF will provide relevant contributions.