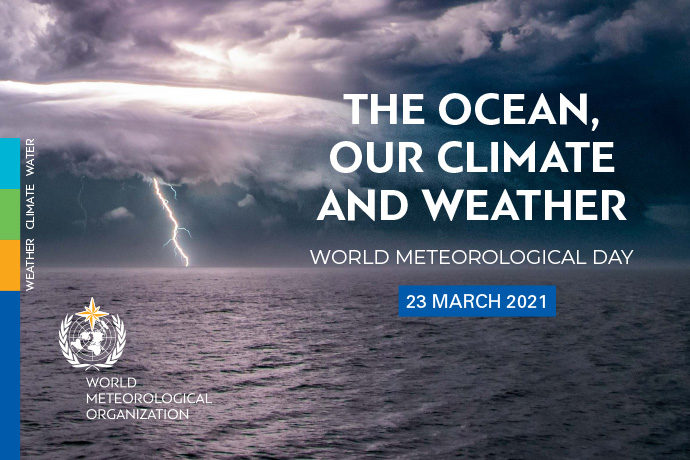 ‘The ocean, our climate and weather’: the theme of this year’s World Meteorological Day on 23 March celebrates the WMO’s focus on connecting the ocean, climate and weather within the Earth system. It also marks the launch of the United Nations Decade of Ocean Science for Sustainable Development.

The importance of the ocean in weather and climate science has long been recognised at ECMWF. Since the ocean component was first introduced at ECMWF to enable seasonal forecasts to be issued from the end of the 1990s, the Centre’s ocean activities have matured and been consolidated. The ocean is now an integral part of the ECMWF seamless ensemble forecasts for medium, extended and seasonal ranges.

Magdalena Balmaseda, Head of the Earth System Predictability Section at ECMWF, explains how studying and understanding the ocean is important for weather prediction and the development of new forecast products, including for extreme marine events.

The ocean initial conditions are considered the main source of predictability at seasonal timescales, along with the representation of large ocean–atmosphere feedbacks involved in phenomena relevant for this time range, such as El Niño and the Indian Ocean Dipole.

Representing the ocean–atmosphere interaction is also needed for the prediction of tropical modes of organised deep convection, such as the Madden–Julian Oscillation, the cornerstone of subseasonal predictability. Representing air–sea interaction at faster time scales is also important for improving the representation of the diurnal cycle and tropical cyclones, contributing to skill improvements at all time scales.

There are now increasing efforts to understand the role of the ocean, western boundary currents and ocean eddies in meteorological phenomena such as warm conveyors and blocking, which affect both weather and climate.

A dynamical ocean model opens the gate to new science areas, such as the interaction between waves and surface currents, and the interaction with sea ice. Since 2016, the ocean component of ECMWF’s Integrated Forecasting System also includes a dynamical sea-ice model. This allows the prediction at different timescales of sea-ice conditions, information that is especially important at times when the sea ice is undergoing unprecedented changes.

Long temporal records of the physical ocean, e.g. ocean reanalyses, are also needed to initialise the retrospective hindcasts that are used for the calibration of seasonal and extended-range forecasts and for the prediction of extreme events. The current operational ECMWF ocean and sea-ice analysis system, OCEAN5, is the fifth generation of its kind, providing consistent records spanning several decades, and continuously updated in real time.

Ocean reanalyses are an important resource for monitoring and understanding climate variability and change, and OCEAN5 contributes to ocean monitoring activities by the Copernicus Marine Environment Monitoring Service (CMEMS).

Ocean reanalyses and their real-time extensions have been enabled by the availability of ocean observations and surface fluxes of momentum, heat, water and energy from atmospheric reanalyses and numerical weather prediction (NWP). These are integrated via an ocean model and data assimilation system. Developments in these individual components result in increased reliability of the ocean monitoring and initial conditions, which eventually translates into increased skill of forecast products.

A promising area of development is coupled data assimilation. Here, the inclusion of air–sea interaction physical constraints in the assimilation of surface variables allows better exploitation of ocean and atmosphere observations for a more consistent representation of the exchanges at their interface.

ECMWF is actively engaged in a programme for coupled data assimilation expected to be implemented operationally in the next few years. This will enable the provision of consistent Earth system reanalyses, and better initialisation of the coupled forecasts. Improved atmospheric surface fluxes will benefit other applications, such as the Copernicus Marine Monitoring Services.

An exercise in global collaboration

ECMWF uses the NEMO community ocean model and is an active participant in its development. The ocean data assimilation developments are carried out within the NEMOVAR consortium, a small group of researchers from different institutions around Europe.

Demand for ocean forecast products is increasing, and activities are ongoing to validate ocean forecast variables such as sea level, upper ocean heat content and depth of the ocean mixed layer. Thus, the WWRP/WCRP Subseasonal-to-Seasonal (S2S) database now offers a subset of ocean variables from the extended-range forecasts. These variables from the medium-range forecasts are also publicly available as the ECMWF contribution to the Year of Polar Prediction (YOPP). The EU-funded Copernicus Climate Change Service (C3S) will soon distribute these ocean variables from seasonal forecasts.

The skill in forecasting the ocean variables is being assessed as part of the EU H2020 EuroSea project.

The possibility of detecting and predicting marine extreme events such as marine heatwaves is being explored. A marine heatwave (MHW) is defined as a prolonged period (usually 5 days or more) of sea-surface temperature (SST) above the 90th climatological percentile. Since we are likely to experience many more such events as the oceans continue to warm, it is urgent to understand and categorise the intensity of marine heat.

A marine heatwave is potentially devastating for marine ecosystems, jeopardising aquaculture and decimating fish stocks and sea bird populations. It also increases the risk of toxic algae blooms and coral bleaching. As important as it is to identify a marine heatwave when it occurs, reliable predictions of developing conditions would help local authorities, aquaculture companies and fisheries with advance planning and preparedness.

A major marine heatwave (MHW) occurred in December 2019 to the south east of New Zealand, as seen in the OCEAN5 chart (top) showing the sea-surface temperature (SST) anomaly for 16–23 December 2019. This MHW was predicted by ECMWF extended-range forecasts 3 weeks in advance, as shown by the Extreme Forecast Index (EFI) for SST initialised on 25 November and valid for 16–23 December (bottom; shading).

Seasonal predictions of the increased risk of marine heatwaves are also being explored within the EuroSea project. The OCEAN5 MHW detection algorithm indicated that during the summer 2020 (June–July–August) extreme temperature values (exceeding 90% climatological values) were widespread and long lasting: more than 80 days over large areas of the Indian Ocean and Western Pacific; more than 50 days over the Tropical Atlantic, along the southern edge of the Pacific subtropical gyre, and also over the Central to North East Pacific and the Southern Ocean along the Antarctic Circumpolar current.

Extreme temperature values were widespread and long lasting in summer 2020 (June–July–August), as indicated by the number of marine heatwave days detected by OCEAN5 (top). The extreme nature of the season was captured by the ECMWF seasonal forecasting system SEAS5 in the forecast initialised in May and verifying in June–July–August 2020 (bottom), which predicted the extreme values in the right areas with more than 90% probability. The reference climatological period is 1993–2006.

The widespread occurrence of extreme values is a clear manifestation of the consequences of a warming climate. It is also an indication of changes in the buffering ability of the oceans, which have absorbed more than 90% of the excess heat of human-induced warming.

Contribution to the UN Decade of Ocean Science

ECMWF is ideally placed to contribute to the UN Decade of Ocean Science for Sustainable Development (2021 to 2030), in terms of both science and data products to enable science.

Earth system reanalyses with consistent representation of surface processes will be an invaluable resource for advancing the understanding and quantification of energy and water reservoirs and transports.

The provision of ocean products from ECMWF’s coupled forecasting systems is expected to stimulate scientific research on the predictability of weather and climate and enable the preparation of tailored forecast products.