The 2021 Antarctic ozone hole was big and long-lasting 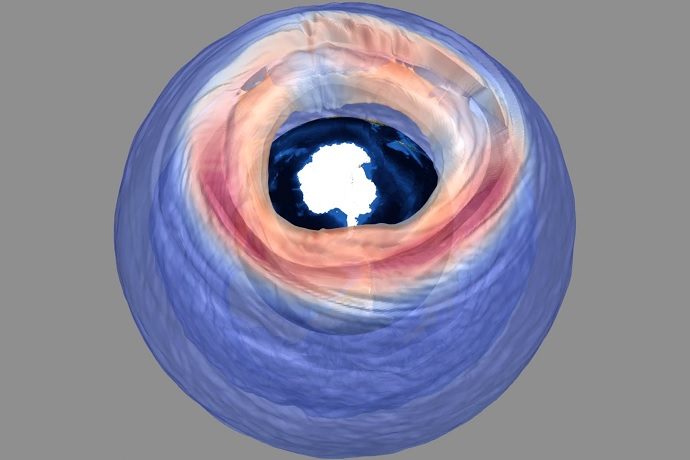 The 2021 Antarctic ozone hole was relatively big and long-lasting, the EU-funded Copernicus Atmosphere Monitoring Service (CAMS) run by ECMWF has found. It does not mean that the longer-term aim to close the ozone hole is off-track.

The ozone hole was the eighth largest since records began in 1979, according to records of CAMS and the Copernicus Climate Change Service (C3S) run by ECMWF. It closed on 23 December, the third latest date after 1999 and 2020.

The extent and longevity of the 2021 ozone hole can be explained by very cold temperatures in the stratosphere and a very stable polar vortex.

This video shows the evolution of the 2021 Antarctic ozone hole.

After a rather standard start at the beginning of August, expansion of the ozone hole picked up in the first two weeks of September. At that stage, it was larger than 75% of ozone holes since 1979.

That extent is over 700,000 square kilometres greater than the maximum reached in 2020. Overall, the 2021 ozone hole was the eighth largest on average since records began in 1979.

The size of the Antarctic ozone hole since 1979, based on CAMS and C3S records, shows that in 2021 it was relatively big. The chart shows the average, maximum and minimum extent of the ozone hole for the period of 7 September to 13 October. (Credit: Copernicus ECMWF)

The ozone hole is defined as an area with total ozone column values of less than 220 Dobson Units (DU). A Dobson Unit is a measure of the amount of a trace gas (typically ozone) in a vertical column throughout the depth of the Earth's atmosphere.

Figures recorded by CAMS show that, in 2021, minimum DU values stayed low for longer than usual. The evolution from July to December 2021 is similar to that of 2020, increasing slowly in the second half of October, and then picking up in pace in November and December.

Long-term recovery of the ozone layer

The Montreal Protocol, signed in 1987, is an international treaty designed to protect the ozone layer by phasing out the production of substances such as chlorofluorocarbons (CFCs) and halons that are responsible for ozone depletion.

The Protocol is curbing the amount of these substances in the atmosphere, resulting in the slow recovery of the ozone layer. However, because of their long lifetimes it will still take about four decades for the ozone layer to fully recover.

Vincent-Henri Peuch, Director of CAMS at ECMWF, said about ozone levels in 2020 and 2021: “These two longer-than-usual and fairly deep episodes in a row are not a sign that the Montreal Protocol is not working. They are connected to two years marked by very cold temperatures in the stratosphere and a very stable polar vortex.”

The stratospheric ozone layer acts as a shield, protecting us from potentially harmful ultraviolet radiation. It is therefore extremely important to track how it changes.

Further information on the 2021 Antarctic ozone hole and the monitoring of the ozone layer is available on the CAMS website.