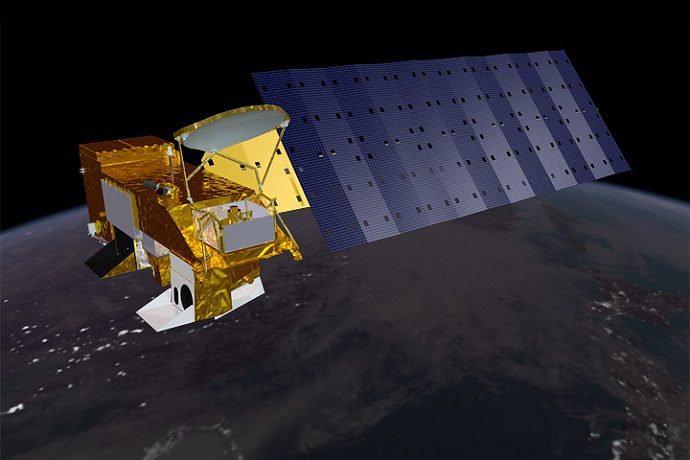 On 4 May 2002, the research satellite Aqua was launched from Vandenberg Air Base in California and was placed in an afternoon orbit. Some of its observations continue to be assimilated by ECMWF’s Integrated Forecasting System (IFS) to help establish the initial conditions of weather forecasts.

Aqua is the second major satellite of NASA’s Earth Observing System (EOS) following the launch of Terra in 1999 and preceding the launch of Aura in 2004. Each of these platforms carried different sets of instruments.

The payload of Aqua comprised six sensors designed to observe the vertical distribution of temperature and humidity, surface parameters (precipitation, sea ice and sea-surface temperature), clouds and atmospheric composition (aerosols and fire). Some of these instruments were newly designed and were used as demonstrators for operational meteorology.

“Aqua was a very influential satellite for global numerical weather prediction (NWP),” says ECMWF observation monitoring scientist Mohamed Dahoui. Its heritage instrument, the Advanced Microwave Sounding Unit-A (AMSU-A), started to be assimilated at a time when few of its kind were available.

It was particularly useful since Aqua was the only satellite covering the afternoon orbit. The instrument is partially working despite the failure of several channels. ECMWF stopped using it in late 2020 due to a long outage followed by a change of dissemination routes.

The Atmospheric Infrared Sounder (AIRS) was the first hyper-spectral sounder to be introduced to NWP. Beyond the immediate benefit of assimilating a large amount of data from AIRS, the preparatory work and experience gained paved the way for and accelerated operational exploitation of later sensors, such as the Infrared Atmospheric Sounding Interferometer (IASI) and the Cross-track Infrared Sounder (CrIS).

“AIRS was particularly useful to develop and test cloud detection schemes for hyper-spectral infrared sounders,” Mohamed says. “The huge real-time data rates also exposed limitations in the IFS and led to improvements in observation handling.” ECMWF started to actively assimilate AIRS as early as a few months after launch and demonstrated a clear positive benefit in operations. AIRS is still operational and continues to be used.

The Advanced Microwave Scanning Radiometer for EOS (AMSR-E) was another useful instrument onboard Aqua. AMSR-E and other imagers contributed to efforts that led to the all-sky assimilation of microwave imagers at ECMWF. Demonstrated benefit from AMSR-E led to the follow-on instrument AMSR2 onboard Japan’s GCOM-W satellite. AMSR-E experienced a permanent failure in 2011.

The Moderate-resolution Imaging Spectro-radiometer (MODIS) is used by several environmental disciplines. In NWP, atmospheric motion vectors derived from MODIS are used operationally. Aerosol optical depth and fire radiative power based on MODIS data are used in the Copernicus Atmosphere Monitoring Service (CAMS) run by ECMWF for the EU. MODIS is still operational and continues to be used.

“Despite being a research satellite, Aqua benefited from a ground-breaking collaboration between NOAA and NASA that resourced operational data dissemination support and led to the availability of near-real-time observations, fulfilling the timeliness requirements of global NWP,” says Tony McNally, the head of ECMWF’s Earth System Assimilation Section.

Twenty years after its launch, some instruments (AIRS, MODIS and partially AMSU-A) are still healthy and continue to provide useful science data. Such good-quality long data records from a single sensor are quite unique and critical to monitor climate trends. An example of this is shown in the figure below.

Mean uncorrected observations-minus-background (O–B) values for brightness temperature departures from AIRS Channel 216 (peaking around 415 hPa). The background is from ECMWF’s ERA5 reanalysis. The O–B values clearly demonstrate AIRS observing seasonal variations in CO2 due to changes in vegetation as well as the long-term climate trend.

The data can also be used to assess the frequency of certain weather events, such as sudden stratospheric warmings. This can be seen in the figure below.

Mean observed brightness temperature from AIRS Channel 54 (peaking around 10 hPa) over the northern polar area. The sudden increase of temperature in wintertime is related to sudden stratospheric warming events clearly observed by the AIRS stratospheric channels.

With 20 years in operations, Aqua is the second longest-serving Earth-observing satellite, just behind NOAA-15. Some key instruments are still healthy and are expected to continue to provide good-quality data if the level of support is maintained.