ECMWF’s flood team to use results of TAMIR project 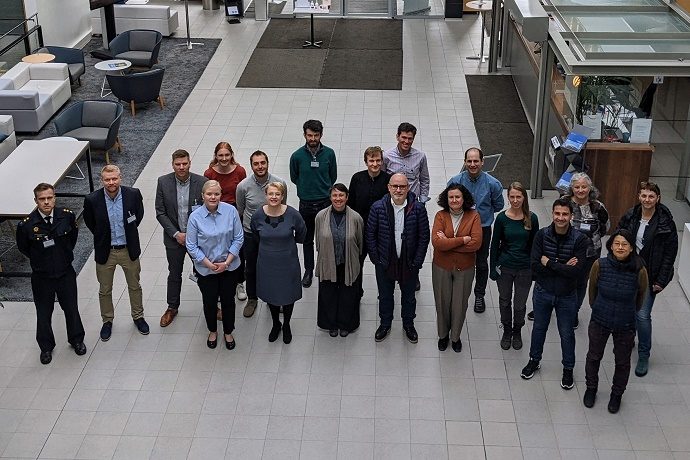 An ECMWF delegation has taken part in the final workshop of the EU-funded TAMIR project on tools for the management of floods, especially in smaller rivers where current pan-European forecasting capacities are limited. They expect to build the outcomes of the project into the EU’s Copernicus Emergency Management Service (CEMS), to which they contribute.

TAMIR is a European Commission Civil Protection Preparedness project running from February 2020 to May 2022. It is coordinated by the Finnish Meteorological Institute (FMI), and the final workshop took place in Helsinki, Finland, on 4 and 5 May. The event included 85 participants and was partly held online.

“TAMIR has enabled innovative, comprehensive and far-reaching research and development,” says FMI’s Annakaisa von Lerber. “ECMWF had an essential role in the development of products, for example in blending nowcasts and model forecasts seamlessly together and developing the methodology for combining the exposure layers for probabilistic impact products.”

ECMWF took part in the project because of its experience of blending radar data on precipitation with numerical weather prediction (NWP) data and its role as the Hydrological Forecast Computational Centre for CEMS.

“We provided expertise in this field and developed a flood forecasting operational suite to complement existing products of the CEMS European Flood Awareness System (EFAS),” says Ellie Hansford, one of the ECMWF scientists who took part in the workshop.

TAMIR has a standalone platform, but the goal is to include some TAMIR tools in the EFAS Information System, developed and operated by ECMWF.

A key activity of TAMIR has been the translation of hazard forecasts, such as of rain and flooding, into impact forecasts. “Hazard forecasts on their own are of limited use unless you help people make impact-based decisions,” Ellie observes.

‘Impact’ can be understood as ‘hazard’ combined with the ‘exposure’ within the spatial footprint of the hazard. One of ECMWF’s contributions to TAMIR was to operationalise the ‘exposure’ concept. As part of this, it was necessary to define with users what socio-economic assets should be considered within the concept of exposure.

“We asked end users to make suggestions and came up with population, health care, education, transport and energy as key concepts to account for exposure,” Ellie says.

One of ECMWF’s activities in the TAMIR project has been to develop a concept of ‘exposure’ that could be used to contribute to ‘impact’.

ECMWF has been keen to engage end users in the design of new tools. “Once we’d developed the initial products and run some case studies, we sent out a short survey to ask end users for feedback,” Ellie notes.

Questions concerned the general design and how usable the tools were. These then went through several iterations to make them as useful as possible. ECMWF is now developing the prototype processing chain for the TAMIR products to be generated in near real-time. These near-real-time products will become available via the EFAS website as well as web services.

In addition to FMI, other participants in TAMIR are the Spanish Polytechnic University of Catalonia (UPC), and the Kymenlaakso Rescue Department, a local Finnish firefighting service, which provided feedback on some of the products.

“This EU project has been very useful for developing new products to complement the services we provide as part of CEMS,” says Christel Prudhomme, ECMWF’s Environmental Forecasts Team Leader. “The work started in TAMIR will continue so that we can provide new European flood-related services.”