European State of the Climate 2021 shows a year of contrasts 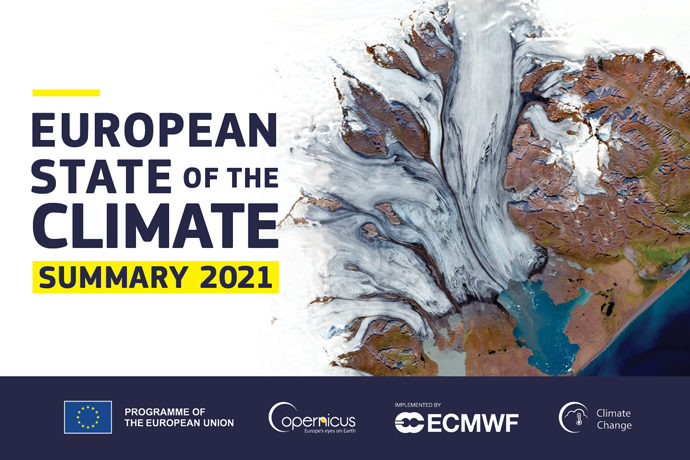 The European State of the Climate (ESOTC), published annually by the Copernicus Climate Change Service*, provides an overview of the previous year’s climate for Europe, with a summary of the global context and a focus on the Arctic. The report presents the kind of consistent and dependable data that policymakers can use to understand climate change and its impacts.

Globally, atmospheric concentrations of greenhouse gases continued to increase. In particular, levels of carbon dioxide were higher in 2021 than at any time in at least two million years. The last seven years have been the warmest on record, contributing to continued loss of ice mass from glaciers and ice sheets, which in turn has an impact on sea level rise.

During the year, there were widely contrasting conditions across the Arctic. While temperatures for the region as a whole show a long-term increase, in 2021, they were less extreme than in recent years. From January to March, it was unusually cold over Arctic Eurasia; however, much-above-average temperatures over Greenland in July and August led to three large-scale melt events.

In Europe, a provisional temperature record was set for the region as a whole (48.8 °C in Syracuse, Italy), and there was a provisional country record for Spain. Annual average sea-surface temperature records were also set, in the eastern Mediterranean Sea and in parts of the Baltic Sea, which reached more than 5°C higher than average during the summer.

A summer of extremes for the Mediterranean

Although summer is often hot and dry in the Mediterranean, the temperatures during summer 2021 were extreme. A long and exceptionally warm heatwave was experienced during July and August, lasting for several weeks in some areas. Very high temperatures were recorded in Sicily, Sardinia and southern Spain.

Large parts of the Mediterranean saw lower-than-average soil moisture throughout the summer. Amongst the regions experiencing severe to extreme drought conditions In July and August were Italy and the Balkans. The widespread hot and dry weather was conducive to numerous wildfires. Over 800,000 ha were burnt across the whole of the Mediterranean, making it one of the most intense fire seasons since 1991.

Variation in the precipitation across Europe

The year as a whole saw near-average amounts of precipitation. However, there was variation during the year and across the region. January was the wettest month, at 0.5 to 0.7 mm/day above average, and March had the driest anomalies, at -0.2 to -4 mm/day. In most of eastern and southeastern Europe, the number of wet days was higher than average, while most of Scandinavia and areas around the Baltic Sea had fewer wet days than average.

In July, parts of Belgium, Germany and eastern France experienced some of the heaviest rainfall on record for the region. This was partly fed by a slow-moving area of low pressure, which drew water into the region from an unusually warm Baltic Sea. The extreme precipitation contributed to severe flooding. For northwestern Europe as a whole, river discharge in July was the highest on record. Exceptionally high river flow was measured in many catchments, especially within the Meuse and Rhine.

The concurrent atmosphere-land-ocean conditions at the time of the flooding event in western Europe: a slow-moving area of low pressure, which drew water into the region from an unusually warm Baltic Sea, encountered hills on the Belgium-Germany border, releasing record amounts of rain onto already-saturated soil. The already-saturated soil was unable to absorb the excess water and severe flooding ensued.

For more detailed analysis of the events and conditions described, as well descriptions of further climate conditions and events last year, explore the full European State of the Climate 2021 and the Summary.

*The Copernicus Climate Change Service is implemented by ECMWF and funded by the European Union.